When I was young, I used to make fun of people who believe that other people can read their future out of hand, and I still make fun of them, but during last year I figured out that with the help of technology, it is now easy to read people’s hidden presence.

As an iPhone user, yesterday, while I was unlocking my mobile using facial recognition, I took a moment of thinking and I found how far we have reached using this technology within all business fields especially in health insurance companies. So as being one of 250,000,000 annual customer of apple (250,000,000 average of iPhone devices sold per year), I became really surprised and fascinated about facial recognition technology to the point I opened up my mouth.

Off late, apparently, that our face has not just become as a way of recognizing ourselves. In the era of computer, which sees more than we do by far and learns faster than us by far. Most important, it sees some really personal secrets. For a second my mind got frozen from happiness as finally I can imagine what the real emotion for Mona Lisa was 😀, RIP da Vinci.

In such an amazing computer simulation experiment at Stanford University, two researchers made the computer study more than 35,000 photos from self-identified and heterosexual people from public dating sites and after training the computer, the algorithm was able to correctly differentiate gay and heterosexual men with an accuracy reaching 81% of and 71% accuracy for women. Just from the face, the device (artificial intelligence) becomes able to differentiate, identify and predict the sample based on sexual orientation. At the end of the research, the researches wrote “our findings expose a threat to the privacy of men and women”. Moreover, if you show the device 5 pictures of the same person, its recognition accuracy jumps up to 91% and this just through the face. Such a surprisingly percentage as human mind can only reach 60% of recognition with the same number of photos. From this study, we can see, there is a direct positive relationship between increasing the sample size and level of recognition accuracy.

So from what has been stated above, we can reach a conclusion that by increasing sample size, the accuracy level increases. We can prove our conclusion by the result declared in China. This development of technology is now able to recognize the citizens in a heavily populated country like China in less than 3 seconds. Out of 1,400,000,000 citizens (sample size), this technology is able to recognize any specified citizen within the mentioned duration. Moreover, this technology has applications in different fields as many criminals have been captured using this technology within the same rate. This occurs at present. You can imagine if China develops this technology, which is currently being done, this duration will be minimized and the accuracy level will be maximized according to the above stated conclusion.

Last year, the biology scientist Craig Venter, one of the greatest scientists in the field of biology, specifically in DNA sequencing, I have ever seen published a research in PNAS journal, illustrating that using DNA, the device can recognize 80% of the faces. If you give the device 10 DNA, for example, it can expect how 8 persons faces will look like. So, with the sample of 1000, it reached an accuracy of 80% in the expectation. So, if this is applied to eg China, you can imagine how high the percentage of accuracy will be in future. Again our face reflects our gene. If you see this issue as not a big deal, I won’t agree with you. As in 1950s we have exerted every effort just to know the structure of the DNA. So, in a nutshell, what ever is hidden in our genes, we can see it on our faces.

Some readers may say, it is just an identification technology similar to Touch ID and it is not going to save Titanic. I will tell them, you are right, it is not gonna save Titanic, but it is gonna save many health insurance companies. This technology will have a great effect on health insurance companies as from 30-40% of genes’ diseases (genetic disorders manifest craniofacial abnorma) have effect on faces and skulls as Hart and Hart stated in 2009. Health insurance companies can know a lot about your health without making any blood test, just with your facial recognition analysis, which you do not have any will in. This will help insurance underwriter to minimize the risk as much as possible.

To sum up, just using facial recognition technology, the devices can declare our characteristics, orientations, and also behaviors. So are you still interested in iPhone or you will turn to Android 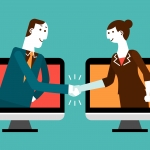 My experience with remote interviews
Scroll to top