We have a pretty nice office in Zurich. I’ve just missed from day 1 on some plants. Many different are suitable for the office, but I opted for something that also brings a return.

After the installation of the Click and Grow Smart Garden 3 in our office, we had mainly a little bit more of illumination 💡😂

There are plenty of different pre-seeded pods available. You could as well seed something by your own. But I’ve decided to start with the following plants because I assumed that they will be a good snack.

After four weeks the plants sprouted and grew steadily bigger. At least the sweet pepper and tomato. Not sure what’s wrong with the wild strawberry 🤔🍓

Another 2-3 weeks and the tomato was already in bloom. But afaik we have no bees at Citizen Space in Zurich and I wondered if pollination even works.

Some researches later, I found out that today’s tomatoes do not need cross-pollination but could still need some support:

As tomatoes were moved from their native areas, their traditional pollinators, did not move with them. The trait of self-fertility became an advantage, and domestic cultivars of tomato have been selected to maximize this trait.

This is not the same as self-pollination, despite the common claim that tomatoes do so. That tomatoes pollinate themselves poorly without outside aid is clearly shown in greenhouse situations, where pollination must be aided by artificial wind, vibration of the plants, or more often today, by cultured bumblebees. The anther of a tomato flower is shaped like a hollow tube, with the pollenproduced within the structure, rather than on the surface, as in most species. The pollen moves through pores in the anther, but very little pollen is shed without some kind of externally-induced motion. The ideal vibratory frequencies to release pollen grains are provided by an insect, such as a bumblebee, or the original wild halictid pollinator, capable of engaging in a behavior known as buzz pollination, which honey bees cannot perform. In an outdoors setting, wind or animals usually provide sufficient motion to produce commercially viable crops

My expert pollination of the plants seemed to work. There are at least four little green tomatoes 🙂 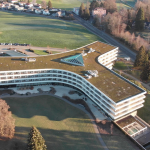 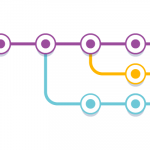